HomeInternet10 Tech myth that you should know whether it is true or...
Internet 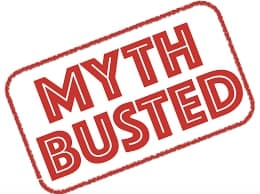 A computer is a piece of electronic equipment that manipulates data or information. A myth is a traditional story, usually including supernatural beings or events, that tells about a person’s early history or explains a natural or social phenomenon. Tech myths are things we have been hearing for a very long time that are either wrong or right.

Myths about the computer are as follows:

1.   You have to remove USB devices by clicking on eject. Otherwise, it will corrupt your USB device

One of the tech myths is that, when we plug a USB device into your computer, the’safe remove’ option is enabled. But is it really necessary that you have to safely remove your USB devices, and what happens if you don’t? It makes no difference whether you utilize this option or not as long as you are not sending data while disconnecting it.

As a result, if your USB device is idle, you can safely remove it.These are some popular myths that people still believe, but you now know they are just that.

2. Having more ram will make your computer run faster.

Another tech myth is that when it comes to updating our computers, adding more RAM is usually the first step — and for good reason. 4GB was formerly the industry standard; currently, 8GB is the norm, with 16GB being the sweet spot for high-end gamers and power users. However, some people on the internet believe that upgrading to 32GB will maximize their performance and greatly boost their computer speed, but this, too, is dependent on the tasks you intend to accomplish with your PC. 4K video editing, web development, and 3D rendering are some of the instances where 32GB or more is recommended.

4K video editing, web development, and 3D rendering are some of the instances where 32GB or more is recommended. Consider this: if you don’t use more than 8GB of RAM on a regular basis, what good is 16GB or 32GB? Consider other upgrades, such as SSDs, which can significantly improve performance when it comes to booting your PC or launching critical applications. Similarly, upgrading a ten-year-old monitor to a current, high-resolution LCD display could vastly improve your computer experience. Of course, upgrading your RAM is crucial if you need it, but there are a slew of other upgrades you should think about to improve your computer experience.

3. Antivirus will protect your computer fully from the virus-a big tech myth

This does not imply that the sky is falling, nor does it imply that you should fully forego antivirus protection. However, after taking other security steps, antivirus should be your last line of defense. So talking about this tech myth, antivirus will protect your computer only upto some extent.

4. Fast charging will not degrade the quality of your battery: Tech myth on fast charging

Many people believe that quick charging is harmful for their phone’s battery and that their battery would lose capacity over time. However, this isn’t exactly the case; newer batteries can receive power at a far faster rate.

Modern chargers may also offer a large quantity of current to speed up the charging process. This does not rule out the possibility of a negative impact on the battery’s performance or life cycle. We have confirmed the tech myth that adopting fast charging will not degrade your battery quality.

5. You have to erase cache files regularly to speed your computer up.

We also have been talking about this tech myth that running CCleaner, another temporary-file-cleaning product, or even the Windows Disk Cleanup tool can help you clear up disk space. When you delete a significant number of worthless files from an old computer, it may even speed up.

On the other hand, using CCleaner or similar applications to clear your browser’s cache on a daily basis will not actually speed things up. It will slow down your web browsing because your browser will be required to redownload the files and rebuild the cache you delete on a regular basis. You’re actually slowing down your web browsing if you’ve installed CCleaner or a similar tool and run it every day with the default settings. At the very least, don’t let the application delete your browser’s cache.

6. Refreshing your computer will make it run faster than before-Biggest tech myth

It merely refreshes the screen you’re on and checks to see if anything has been added or removed from that screen. For example, if you copied anything onto your desktop but it isn’t showing up, refreshing the desktop will bring it up. It is one of the most common tech myths in the computer world, and you may also do this now too.

7.   When you are using incognito mode, no one will be able to track you.

Many individuals believe that using incognito mode will protect them from being tracked, however this is a misconception. When you enable incognito mode, a warning appears that informs you that your browser will not save your history, cookies, site data, or anything provided in forms.

However, it also states that authorities and websites that you visit will be able to trace your movements. So, the next time you use incognito mode, remember that you are not hidden from the rest of the world.

Most of us still believe that if our phone displays the greatest number of network bars, the network quality is superb. However, such is not the case here. The network bars simply show how strong the network is, not how good it is.

If you are near a mobile network tower, for example, your phone will indicate maximum network bars; but, if a large number of people are connected to the same network, the network quality will be poor, resulting in call errors and slow internet speeds.

9.   The default Internet Explorer on windows is slow, vulnerable and bad.

Internet Explorer is a joke among those who know what they’re talking about. To distance itself from Internet Explorer’s reputation, Microsoft is replacing IE with a new browser called Edge in Windows 10.

Recent versions of Internet Explorer, on the other hand, are actually rather decent. Internet Explorer 9 really improved things, while Internet 10 and 11 are even better. In addition, Internet Explorer offers a “protected mode” sandbox and a multi-process design, both of which Mozilla Firefox lacks. In certain testing, Internet Explorer was found to be more battery-friendly than Chrome, Firefox, and Opera on a Windows laptop.

We’ve all seen the commercials that say, “Download X-Junk Removing Crapware Program for 300x Faster Speeds.” These apps claim to fix registry errors, download driver updates, delete programs you can’t uninstall manually, and clear your computer of “issues” of unknown origin and purpose. What is the truth? This is useless software that should never be installed, regardless of your operating system. The tech myth that people have been listening to is that “installing cleaner on your computer will clean residual files, resulting in a faster computer.”

These programs are frequently used to distribute malware such as spyware or adware, and they rarely, if ever, provide any benefit. Because registry entries are so small, deleting them frees just a tiny amount of space with no performance impact. What about driver updates? If you’re prompted or have problems with peripherals, you can download them yourself. Uninstallers for a fee? It isn’t required. If you can’t entirely uninstall an application, the files it leaves behind are usually in the registry and aren’t worth worrying about. Cleaners? The problems that they genuinely solve are usually the ones that make it appear as though they’re worth the money or the download.

This was all for this article where we have busted various types of myths about computer.
To read posts from us, you can check our website.