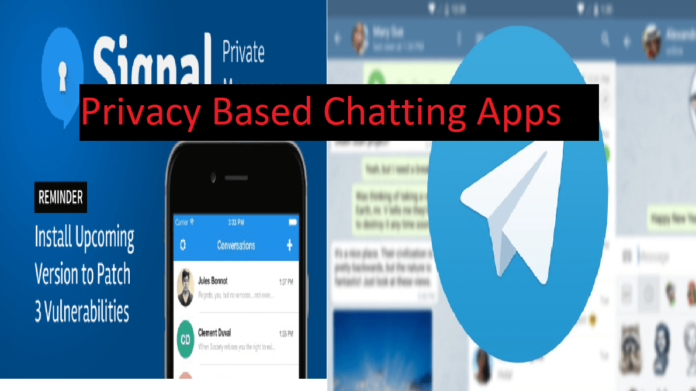 If you’ve arrived at this page, it’s possible that you’ve grown tired of apps like Facebook and Whatsapp due to negative internet rumors. Most people are complaining about the privacy policy and all of us have been hearing about the lawsuit filed against Facebook (known as “meta”) for privacy violations and using the data of the users of those kinds of apps for advertising and selling it to other different companies. In this article we will talk about Privacy based chatting apps.

As mentioned above, many big messaging platforms do not have strong privacy settings to use them with no tension. The conversation data between the users is encrypted, but even after deleting messages from both sides, there might be a third copy of your data on the server. People may not feel secure, and some people can even be afraid of being monitored.

So, if you are one of them and you want an alternative and a good option to shift to, Then, we will explain what makes a messaging app secure and suggest the best application to use without any fear:

What is making a messaging app secure?

It’s likely that we all played around with coded messages as kids, but we didn’t think that coded messages would end up being important in our daily communication now. As it turns out, one of the most important things about a messaging app is that it is encrypted from start to finish.

When your messages are encrypted, that means they are encoded in a way that makes it very hard for someone to listen in on the information that is being sent. If you want to read the messages, you need the right key. It is only the sender and the receiver who have the keys to decrypt messages in an end-to-end encrypted message app.

The default setting for most messaging apps isn’t encryption, but there are some apps that offer it. That means that you would have to go to the settings for your messaging app and turn on encryption – if it even has that option, that is.

Metadata can still be a problem even if the file is encrypted. This includes things like who you talk to based on your contacts, how long you talk to them, your phone number and more. To avoid messaging apps that collect your information, you should not use them at all

You might not believe it, but one of the signs of a secure messaging app’s honesty is that its source code can be seen by anyone who wants to look. In fact, open source code is better than proprietary code because it allows experts to look over the code. Experts who didn’t write the code will be far more likely to find flaws and bugs that could be used to get into the system. The result is a very strong source code and a very safe app.

There are too much privacy based messaging apps found in the internet. After our some researches and homeworks,

We have listed down three of the best apps below:

Signal is likely the best all-around chance when it comes to achieving security and privacy-enabled features. However, because it is not a standard feature on phones, it excludes users of the Messages and Messenger apps. Open Whisper Systems, the company that created TextSecure, started working on Signal, which used end-to-end encryption to protect the delivery of instant messages, group communications, attachments, and media messages to other TextSecure users.

Telegram has been very good platform for heavily encrypted conversations.Voice calls and group chats include end-to-end encryption (both party needs to have Telegram). There is option to self-destruct any type of messages, files, photos, and videos in a certain amount of time after they have been sent to the receiver and the message is received. Users can also turn on secret chats from the app’s advanced settings, which makes app on the other side to delete the messages if you have chosen to do so. To make accessible from your device of origin, these kinds of chats are device-specific. If you want to have your chats secure, you must also be having the secure device simultaneously.

Cost: FREE with no ads

Wickr is one of the few secure messaging apps that can be used completely anonymously. This application enables users to interact with others using fully encrypted text messages, audio conversations, and memos, either one-on-one or in groups. Wickr may be used as a collaboration tool rather than just a messaging software because it allows users to share displays, locations, and online statuses. Wickr does not require an email address or phone number upon registration, ensuring that no user data is collected and hence no access to it by the app. Encryption is enabled by default, and transparency reports are available to all Wickr users. Perfect Forward Secrecy (PFS) is used in this application, and it enables Two-Factor Authentication (2FA). Wickr does not keep track of IP addresses or other metadata.

That is all for this article. If this article helped you in anyway, you can check our website for other more useful information.