Best Programming Language To Learn In 2022 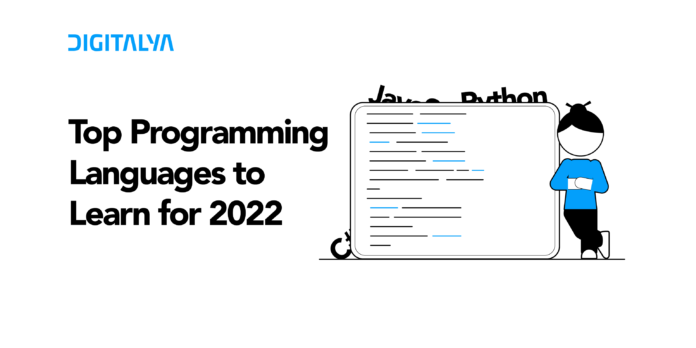 In this post, I’ll go over the “Best programming languages to learn at the beginning of 2022” so you can get a head start on your career as a software developer or data scientist.

A programming language is a set of instructions, commands, and other syntax that is used to develop a software program. “High-level languages” are the languages that programmers use to write code. This code can be turned into a “low-level language” that the computer hardware understands directly.

The goal of high-level languages is for them to be simple to read and understand. This enables programmers to write source code naturally, with logical terms and symbols. Most main programming languages, for example, employ reserved terminology like function, while, if, and otherwise. Common operators include the symbols, >, ==, and!=. Because many high-level languages are similar enough, programmers can understand source code written in many languages with ease.

Assembly and machine languages are examples of low-level languages. An assembly language is far more difficult to comprehend than a high-level language since it comprises a list of fundamental instructions. A programmer may choose to write a basic program in assembly language to guarantee that it runs as quickly as feasible. The assembly code may be translated into machine code using an assembler. The machine code, often known as machine language, is a set of binary codes that a computer’s CPU can understand directly. Machine language, of course, is not intended to be readable by humans.

Only a few people used to be thought of being computer programmers with cutting-edge coding abilities. Many IT positions now need a thorough understanding of many programming languages.

You could be wondering which programming language to learn if you’re looking to grow in your job or change careers entirely. After all, learning a language will involve time and money, so you want to make the best decision possible.

When making your pick, take into account the amount of complexity you’re willing to learn, the information you currently have that aligns with your existing coding abilities, and your motivation for learning a top programming language.

Computer scientists and software developers continue to be in high demand. Developers all across the globe are being urged to reskill as new individuals enter the sector.

There are various aspects to consider while picking a language to learn, including the difficulty level, typical wage for that language, and how that language is utilized in the business. With these considerations in mind, we examined the top 2022 tech trends and forecasts to determine which programming languages are the best to learn.

I analyzed several data and conducted extensive research on the popularity of programming languages based on their usage when compiling this ranking. This information was gathered through services that were created specifically for the purpose, but each one had its unique algorithm. For instance, the number of times it has been mentioned in search engines and forums, or the number of projects that have been established as a result of its use. Regardless, it is hard to predict which language will be the most popular. However, after evaluating my data, I’ve come to the conclusion that there will be seven top programming languages in 2022. The readers’ duty has been made easier; all they have to do now is go over the material I’ve provided.

The very first time we heard about python as a programming language was in 1991. It is simple, but can’t boast its productivity. Let me explain what I mean.

The language is simple, but a beginner will encounter some peculiarities. However, there is still nothing too bad about it. To solve  problems, you get the solutions right from the developers of the language. Oftentimes, Python is recommended for those, who have just started making their way in IT. That is why you can find it in a variety of courses for programmers. Everything is intuitive and simple enough.

Python is renowned in scientific sector:

The specialists use it for system administration more frequently than the other languages. Python is also very compatible with simple utilities.

The programming language is simple, but you still can find some better alternatives. Python is used more often as an addition or a replacement in the projects by the developers. In general, it is still nice to learn in 2022, but I’d recommend proceeding with learning another one too, elsewise you will not be able to do a range of tasks.

This one is called an oldie within the programming languages. It is used by people who continue to work on Microsoft and Windows. Also, it is a perfect solution for video games developers, it can be used for applications, and it works with Unity 3D too. Many changes were brought to it over the years, but it is still in demand. There are two versions C++ and C, the difference between them is 13 years. Why should a programmer learn them? Because these languages had an impact on the ones that are used today. It is obvious that both languages have overcome a lot of changes, but they still spread the message of their creators.

In 1972, when the C was created, PC had a narrow usage, this is why the language was needed improvement. Programmers had to find a new approach and save the resources. At that time programming was about the physical functioning of a personal computer. Now everything has changed.

C and C++ are well known for being the languages that get the most out of the computers. This is exactly when they are used. For instance, in game software development.

It is necessary to learn the Cs, because it will lead the specialists to a better understanding of how the PCs and coding work in general. The knowledge is extremely useful. It is true that searching for an easy solution is not an option. The deeper you dive into the topic, the better is the outcome.

There was quite a long period when Java was the most popular programming language. It was so attractive for the developers because of the cross-platform option. The compatibility with other operating systems and hardware systems is also great. Its creators made a substantial contribution, by using the arrangement and performance of the main code on different platforms. However, there are some drawbacks. Java has a complicated code, and you will not call it a beautiful one too.

However, it is still good to know it. The programmers that use it are well paid. Their income according to the data about salaries in the capital Russian Federation is around 140000-167000 RUB per month.

The specialists use it to work on web development, virtual applications for mobile phones and desktop devices. It has been popular since 1995 — the year of its development. Mainly it is used in backend development. Some people believe that Java is too old now, and it must be replaced, but anyway it is worth learning. About 2 decades people have said that Java is going to die, but it is still used a lot.

And one more thing to be mentioned, Java is often confused with JavaScript. It is the next in our list, and I will tell you more about, so you will have a more profound understanding.

JavaScript is designed for frontend development. JS is simple and easy to learn, these are the main features. However, you will need to know how to deal with frameworks and the infrastructure to use it. Also, you will need to be ready to accept the constant improvements, because some specialists believe that JS logics have some weak points which are being fixed with time.  In the past, there were a lot of weak points, but until 2020 many of them were fixed, and now the developers get less and fewer complaints.

JavaScript can make the website more interactive, it can add pop up windows and simple arcades. It was developed in 1995, and now the salary of the people who use it in Moscow is approximately 98000 per month.

It has been in use since 2014. Mostly for developing applications for IOS. The language is quite new, but definitely should be given attention. The features are open source code and simple syntax. And a great advantage is the superb integration with Objective-C. Also, Swift is used on FlappyBird, Mozilla Firefox and WordPress.

I would like to emphasize that it became popular fast enough. It is an unusual case. This may be because of Apple, who developed the IOS platform and now introduces new improvements. However, learning Swift as a main language is a bad idea. It works only on IOS, but there are more Android devices, so it is better to know how to code for both platforms.

This programming language was developed by the dean of the faculty of computer science for New-Mexico. His name is Cleve Moler. He introduced MATLAB at the end of 70th. In 1984, when Steve Bangert joined the project, a new version of it was released. This language was designed for making control systems, but then it became popular in the next fields:

Today, it is a powerful instrument for statistical analysis. The scientists and engineers use it in various industrial sectors, to process data. You can make algorithms, review the outcome of the studies and process images. You should not have difficulties with learning it. Very often, you can hear that it is more simple than the others.

The Kotlin developer was a company called JetBrains, which is based in Saint Petersburg. The language is quite young, it was made in 2011. It is compatible with Java, which allows switching projects from one language to another. The developers use this feature very often, so they do not need to rewrite the code, all they need to do is to use Kotlin. The specialists, who used Java in the past, often choose Kotlin, because it seems more sophisticated and modern. You can see this language in a variety of sectors. It is used for making Android applications mostly. In the past people used Java for it. To succeed and grow as an IT specialist you will need to know both Kotlin and Java.