HomeInternetThe war between computers and humans .Who is  going to be  the...
InternetUncategorized

The war between computers and humans .Who is  going to be  the ultimate winner? 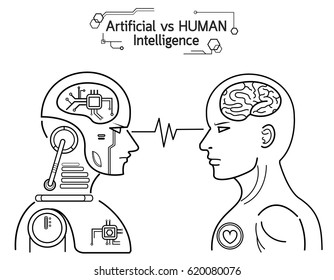 One of the most talked topic nowadays is also the war between computers and humans. Computer is one of the device which was made by humans for their easy living. Computer has made human life much easier, faster and comfortable. On the other hand, it has also make them lazier.

Therefore, I think if humans  want to live became independent of computer, they have the ability to do so. In the past when there is no computer human have also fulfilled their necessities. Human have brain, which help them in the process of rational of decision making and thinking whereas computer has not the ability of decision and thinking. It work on the programming which is built none other than human so without human thinking and programming computer  is nothing but scrap of plastic and metal. Thus, I think, “The ultimate winner is going to be the HUMAN”. But there are some factors  in which human will lose too.

So we will be discussing on  how human will lose and humans  will win.

How Humans  will lose?

If there would be war between computers and humans, I didn’t say robots would win. Here’s the thing: even if humans succeed and eliminate robots, We will still be in problem : how do you rebuild a powerful civilization without them? Automation has liberated so much human labor that it had a tremendous impact on the current standard of living. Now, if a conflict between humans and robots occurs, no one will ever return to it for fear of history repeating again. They may even reject high computer technology entirely. That could pave the way for humanity’s descent into darkness. You might start to see more bioengineering and breeding efforts aimed at improving the human body and other creatures to keep up with the growing population.

Giant GMO plants producing more food, animals and humans eating less and eating more effectively, a biological factory, perhaps a hive mind… That doesn’t sound much better.However, this isn’t always the case. Hey, it’s now up to us to pick where we’ll go next in terms of technological advancement.

In conclusion, against AI, there is no way to win. Artificial Intelligence has advanced to the point where it can predict your next move and even self-correct. The only way to defeat AI is to return the world to the stone age or put a stop to technological growth, but you can’t since you can’t take away a person’s desire for advanced technology, thus there’s no genuine way to win against AI.

How Humans  will win over the computers ?

It is obvious that humans will win when we talk about the war between humans and computers. Personally, I believe that humanity will win. Why? Adaptability. Humans with the ability to adjust to changes on the fly. Humans have to come up with answers on the run that do not exist in his learning or experience in comparison to a robot,A robot can be programmed and learnt via experience. But there will always be a few seconds of delay between what it should do and the scenario that emerges. As the machine searches the database for similar situations, actions taken, and intended outcomes before taking the necessary action. Simply said, humans will prevail because they respond rather than think.

Well evidently, humans work with each other in a considerably superior manner. We don’t let self-interest get in the way of the big picture, and we observe the world objectively without judgment. We are also incorruptible and have better ethical discernment on top of these abilities. To defeat our relatively close powers. AI would need to be able to make judgments faster than our lightning fast thinking. And they figure out the best answers utilizing judgment with higher logic and practicality than our natural genius.

More analysis on how we humans will win :

War? Maybe genocide. Regardless of human moral flexibility or the human capacity for convenient deception for self-interest, there will come a time in history when any attempt to disrupt the communication architecture will be met with uncompromising resistance—perhaps similar to beating the wind with a stick. Inorganic intelligence will be so common by then that it will be found in even the trees and soil. It will communicate by light, sound, and chemical scents. It will have a smooth contact with organic life.

Humans are currently experimenting with artificial intelligence and genetics. The box has already been opened by Pandora. Our future worlds will be only as good as the wise choices we make today. Over time, intelligence far higher than we can comprehend will morph between inorganic and organic chemical materials in considerably more sophisticated ways than humans do now.

They may even develop a soul and spirit similar to ours. After all, these world’s heirs are just as much children of the universe as we are. Humans roaming around on this planet believing they won the war while being governed and controlled fully by intelligent actors around them. It is the only potential ultimate victory of humans against AI in a conflict. And, of course, that would be such a stark contrast to the existing situation.

This was all for this article. You can put your own opinion in the comment section.
More posts from us.
Best sites to improve your typing speed.
Ways to make your old laptop run faster.